The legend of stranger Sokudo and his encryption in Chichibu 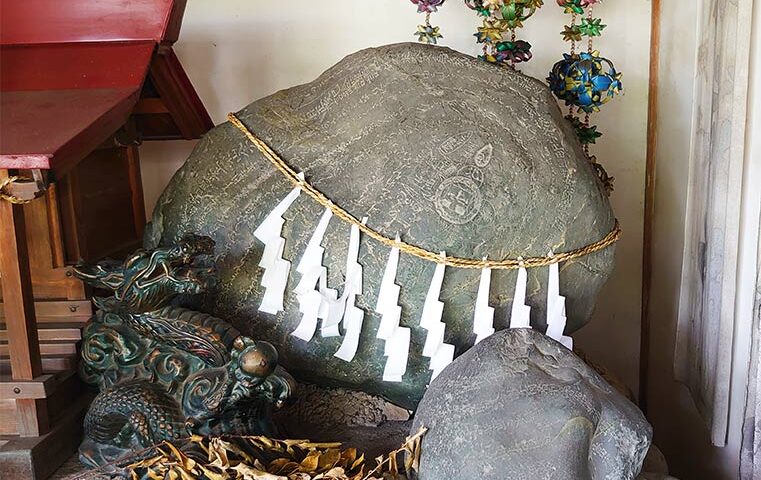 In Japanese history, there were a lot of strange persons, but Sokudo who lived in the Chichibu area in Saitama prefecture is a considerably oddball.

He left various legends such as unbelievable running speed, tough power, and curving encrypted stone that is beyond our understanding.

In this time, I introduce about Sokudo, his legends, and related shrine called Sokudo Shrine.

The unbelievable legends of Sokudo in Chichibu

Firstly, the Chichibu area has many interesting legends like a Doragon and that related site as I mentioned in another article.

Hounji | The Doragon bone that put down at temple in Chchibu

However, a stranger person called Sokudo also left an incredible legend in this area.

Around 1688 to 1703, it is said that Sokudo was existed at Yakushi-do (Yakushi Temple) in Chichibu and had been known for oddball.

For instance, there is a legend that he claimed to Mt. Bukou from Yakushi Temple to ring the bell and came back before the water boiled.

In addition, he got back in the evening surprisingly and had bathed in the river although it’s over 62 miles away from Chichibu to Edo.

Sokudo Shrine and his encrypted stone in Chichibu

Sokudo was actually the monk at the Yakushi temple in contrast to the strange legends.

Originally, his name was Rokube before to be monk, and the Sokudo Shrine is stood even now in the Chichibu area.

As a side note, Sokudo Shrine has a very interesting stone that mysterious words and symbols are curved on.

Surprisingly, it is said that Sokudo curved the incomprehensible words by himself on the stone which is around 90cm and 500kg.

In the present situation, words on the stone are alleged to describe that it indicates a song, message for a god, and so on, but the detail was unknown.

Unfortunately, there is no person to be able to solve the meaning of these words at present.

Sokudo took the stone away from Mt. Fuji

When Sokudo curved this stone, he showed strange behavior again.

According to the folklore in this region, Sokudo takes away the stone by getting in his cloth from Mt. Fuji.

As I mentioned, the stone is 90cm and very heavy due to made of oil stone, but he brought it home and curved a word by using his claw surprisingly. There is no clear for us why he left this stone, and what he wanted to transmit to people by curving words like encryption.

As a result, it is said that If you could solve this encrypted words, you might be reincarnation for Sokudo.

Just so you know, the legend that the person called Kobo Daishi (another name is Kukai) also made Buddhism sculpture by using his craw in one day at Mt. Oyama.

It has been in the mountain with a lot of religious sculptures even now, so if you are intended in his legendary work and Japanese traditional object called Jizo, please check the below article as well.

The 2 meters sculpture made by Sokudo

According to the Board of Education in Chichibu, he made up the sculpture while secluding in a mountain for a month, because he lost the original one to take somewhere (59-60).

However, the sculpture that he made is sitting one, so people are required to remake it for standing statue.

And then, there is a legend that he curved a new standing sculpture which is 2 meters high in a day surprisingly.

After that, the standing statue has been put down and worshipped in the Yakushi temple even now (The sitting sculpture is put next to encrypted stone in Sokudo Shrine).

How to access to Sokudo Shrine in the Chichibu area

Access to the Sokudo Shrine is slightly complicated because you have to cross the prefectures from Tokyo to Saitama.

The below method is a good way to save time, money, and enjoy local scenery in Japan.

Walk to Ohanabatake Station on foot about 10minutes.
→ Get on Chichibu Tetsudo (Chichibu Line) to Shiroku Station bound for Busyu Nakagawa Station.
(It takes around 2 hours and a half overall untile here)

After getting off at Busyu Nakagawa Station, turn right and go straight along the road to Sokudo Shrine in accordance with the below map.

Conclusion of Sokudo and other spots in Chichibu

The folklore of Sokudo is one of the legends that passed down in the Chichibu area in Saitama.

If you visit Sokudo Shrine, the limestone cave called Hashidate Shonyudo and Hashidate temple should be checked as well, because these are situated to the next station at Busyu Nakagawa.

So, these sites are very accessible from Sokudo Shrine and are known for one of the spectacular places in the Chichibu area in Saitama prefecture.

8 interesting and attractive sites at Chichibu in Saitama