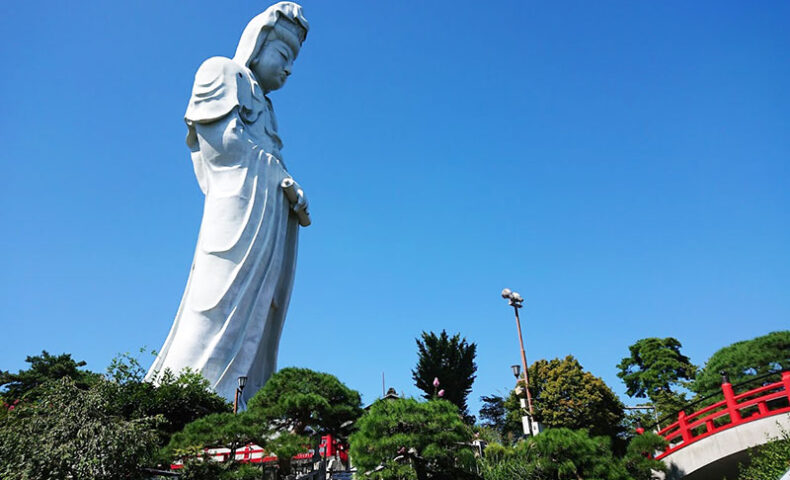 Gunma prefecture in which is located Kanto region is not to be familiar with foreign travelers yet so much.

However, there are actually a lot of fantastic spots like Mt. Akagi, Takasaki city, and so on.

Particularly, a huge sculpture called “Takasaki-Byakui-Daikannon” is one of the great artworks in Japan.

I swear it definitely fascinate and gives you an unforgettable impression.

So, at this time, I will introduce the sculpture as following that background, and other amazing spots around there.

“Takasaki-Byakui-Daikannon” was made of reinforced concrete, and built-in 1936. It originally stands for memorial statues for solider who passed away in world war 2.

About the feature of the sculpture, this has stood on the top of a small mountain called Mt. Kannon which is 190 meters high.

In addition, the sculpture itself reach to 41.8 meters high, and around 6.000 tons. So, this statue was the highest sculpture in the world at that time.

Of course, you can access by car, or bus near the sculpture, because a pavement has been set there. (Read the below section about how to access).

In the side of Takasaki-Byakui-Daikannon

In terms of amazing points for the statue, you can come to the inside statue incredibly.

Then, it is possible to go up to the top of the statue upstairs in order to see a great view around Takasaki city.

Moreover, when you go upstairs, Takasaki-Byakui-Daikannon will give you an unforgettable impression, and a distinctive atmosphere.

For instance, inside of the statue is silent space, and many sculptures that were made from a motif of Buddhas, and gods have been set.

So, you can have a fun time as feeling the religious atmosphere with the sculptures.

Life span of the statue

One thing you must be careful about is a term of renovation for the statue.

It is said that a life span for Takasaki-Byakui-Daikannon is approximately 100 years due to reinforced concrete material.

As a result, a renovation of the statue is going to start off by 2036, so I recommend you visit here as soon as possible before renovation.

The statue is interesting to point in Takasaki City, but there is another attractive spot near here.

That spot is called “Kannon Dokutsu” which means “Kannon’s cave” in English (it takes 15 to 20 minutes from the statue by feet).

In the background, the cave was dug for 50 years from 1919 by the only handwork like a scoop, and pick.

Moreover, it was created based on the image of a remote area like mountains, and valley.

So, the inside cave is absolutely silent, sacred, cold, and dark a little bit.

39 sculptures made of stone in Buddhism will appear in front of you as well.

The sculptures were created by Rakuzan Takahashi who made these with whole his life.

Consequently, these sacred sculptures and the cave’s atmosphere makes you feel like another world.

There are roughly two methods to access Takasaki-Byakui-Daikannon in Takasaki in Gunma prefecture.

I believe that car rental or a combination of buses and trains are the best way.

If you visit by train and bus, the way is the below list.

It takes 25 minutes, 200 yen and, you can go to Kannon Dokutsu (cave) as well before the statue.

If you use car rental, passing through a highway called Kannetsu highway is the easiest.

Other tourist attractions in Gunma

Takasaki city is a fantastic area as I mentioned.

However, if you are interested or visit here, you should also travel to other spots such as Akagi park at Mt. Akagi in Gunma prefecture.

The place has a camping area, lake, marshland that are reached around 1,290 hectares of land and located over 1300 meters high.

In addition, you are able to hike to Mt. Kurobi that is 1,828 meters high and comparatively easy to access from Akagi park, because it is possible to access the park by car.

As a side note, Japan has a lot of sculpture spots and it can be seen around a domestic sightseeing spot.

Particularly, sculptor Seibo Kitamura and his masterpiece called Peace Statue that reach 44 feet and made by innovative methods with deep massages will make us impressed.

So, please read the below article as well if you want to know more Japanese sculpture world.