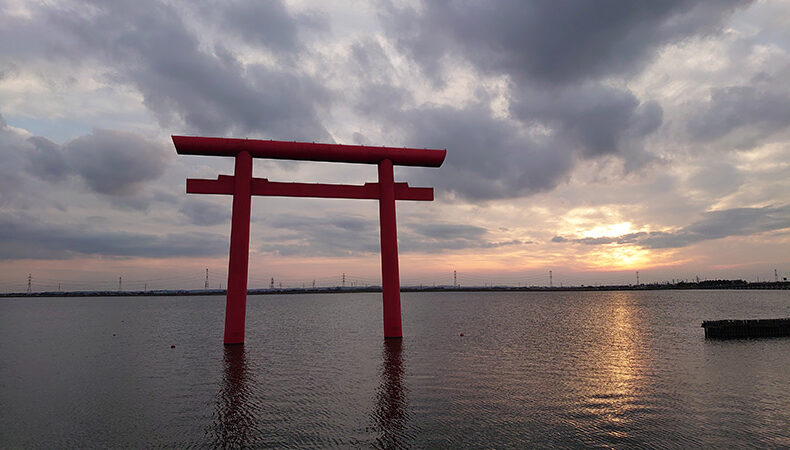 Kashima Shrine (Jingu) is known as one of the oldest shrines in Japan.

In the past article, I introduced many old shrines such as Mitsumine in Saitama prefecture, but Kashima Shrine has reached a history of over 2000 years with a variety of tourist attractions and mysterious spots.

So, I will mention attractive points in Kashima Shrine and spots around there with the historical and mythical background.

The history of Kashima Shrine

Kashima Shrine in Ibaraki prefecture has 2680-year history and name of “Jingu”.

The shrine is technically called Kashima Jingu in Japan, and the name “Jingu” indicates the highest rank of the shrine that only three shrines allow to own it in the past

The list of shrines where had the name of Jingu from the past is below.

So, you would imagine how much Kashima Shrine is magnificent and popular for tourists as a traditional spot in Japan.

The myth and god in Kashima Shrine

Before I introduce a spot in Kashima Shrine, let me describe the story of Japanese myth related to the god that is enshrined in the shrine.

The god in Kashima Shrine is called Takemikazuchi that is known as the god of the sword.

In a mythical age, there is a god called Okuninushi who built a nation in a land named “Ashi-Hara-no-Naka-Tsu-Kuni” in Japan.

Takemikazuchi negotiates with Okuninushi and his sons to hand over the nation for a goddess called Amaterasu.

Okuninushi and his first son accepted it, but the second son called Takeminakata didn’t, so they conflicted by their force.

As a result, Takemikazuchi beat him in the Suwa area and god the nation in Japan.

This narrative is well known for a story of giving nation, and Takemikazuchi is worshiped as a power of the god in Kashima Shrine.

Just so you know, After Takeminakata loss, he promised to not get out from there, so he has been enshrined at Suwa Shrine in Nagano prefecture even now.

Kashima Shrine on the Ley-line

Interestingly, Kashima Shrine is located on the Ley-line in Japan.

The feature of the Japanese Ley-line is that the straight line appears on the map when the historical sites like the below list are connected.

The reason why these sites pass through the Ley-line is unclear, but the start point of Mt. Takchiho is known as a place the god of Ninigi alighted after the narrative of giving nation by Takemikazuchi.

And, it is extending to Kashima Shrine that is enshrining Takemikazuchi, so this arrangement might have something meaning or relationship.

As a side note, Tokyo has a spot where is situated and standing on this Ley-line, so please check the below article as well.

The shrine on the Japanese Ley-lines | Okamoto Hachiman in Tokyo

From this section, I will introduce the interesting spots in Kashima Shrine.

Kashima Shrine is mainly separated by two areas that are a shrine area and a natural spot called Kashima Jingu Forest.

Firstly, tourist attractions in the shrine area are below.

When you visited Kashima Shrine, Japanese wooden torii will show up firstly.

Originally, there is torii made of stone, but it was broke down due to a huge earthquake in 2011.

So, the torii at present was rebuilt by using wooden material that is 600 years tree at Mitarashi pond in Kashima Shrine.

Romon is two stories architecture that is sometimes seen as the conventional site in Japan and plays the role of a gate for the main area in the shrine.

Romon in Kashima Shrine was given from general Tokugawa Yorifusa in1634 and registered Important cultural property in Japan.

Also, this was counted as a 3 major Romon with Hakozaki Shrine in Fukuoka and Aso Shrine in Kumamoto prefecture.

The combination of red surface and the wooden construction is very beautiful, so you should check it before visiting the worship hall.

After you went through the Romon, curious objects made of straw will appear in front of you first.

These are called Osuke dolls and indicate one of a custom and tradition in a region in Japan.

The dolls are symbolized in the shape of a soldier that served the god in Kashima Shrine when he governed the northeast (Tohoku) area in Japan.

So, if you look at these closely, the object like an arrow that is penetrating their body can be seen.

As a side note, it is said that dolls traditionally take away the disaster if it is set on a border of the village according to folklore in Japan.

If you are interested in folklore like this, please check other articles about Japanese customs and traditions.

Commonly, a worship hall in a shrine is called Haiden in Japan, and Kashima Shrine owns it.

The combination of stone torii and wooden hall makes us feel Japanese tradition, but the feature of this place is the consequential architecture that extends untile behind Honden.

Particularly, the main sanctuary called Honden can not be accessed, and 1300 years old of a sacred tree that reaches 131feets is standing inside the territory Interestingly.

And, these shrines were given the second general Tokugawa Hidetda in1619 with “The First Gate of the west”  in the water near Kashima Shrine.

When these shrines can not available for some reason such as reinforcement, an alternative shrine called Karidono is used.

Kashima Jingu Forest is located in the back of the shrine area and has a long approach way surrounded by over 800 trees and plants.

Furthermore, some mysterious places are also there, so please refer to the below list.

First, you will hike on the road to access a tourist attraction in Kashima Jingu Forest.

As I mentioned, the approach way is considerably vast and goes as far as each spot.

However, it might be a good chance for you to explorer Kashima Shrine as relaxing in nature.

During the hiking on the way, you will see Deer Garden called Shikaen and can interact with the animal.

Shika means deer and it is regarded as messengers of the god in Kashima Shrine,

Also, the part of “Ka” in the name of Kashima indicates the meaning of deer in the style of Kanji word in Japan, so deer have been cherished here significantly.

This curious stone is named Sazareishi.

The rock was formed to this appearance as a result of sticking small stones naturally.

The name of Sazare is sung in a part of the lyrics in the national anthem in Japan, so the Japanese natural flag which is curved on the stone monument is there as well.

Okunomiya has just located at junctions point to Mitarashi pond and Kanameishi.

Originally, this shrine was given to Kashima Shrine in 1605 by first general Tokugawa Ieyasu and played a role in the main sanctuary in the past.

But it was transferred from the shrine area to here because a new main sanctuary was built by the second general Tokugawa Hidetada as I mentioned before.

In this way, Tokugawa traces are seen everywhere in Kashima Shrine, and if you are curious about spots that are related to the Tokugawa family, please check the below article as well.

A seven mysterious folklore in Kashima Shrine has been transmitted from the past, and those related spots have existed even now.

Mitarashi pond is one of them and is known as a popular spot in Kashima Shrine due to its unique scene and background.

The small torii is standing on the pond while supporting the fallen tree, and the water looks like transparent water amazingly.

About the origin of Mitarashi pond, it is alleged to describe that the pond was dug by the god of Kashima Shrine using a bow called Amanomagayumi according to folklore in Kashima Shrine.

And then, water was flowed in one night and has not run out even when the disaster occurred, so this pond is called a sacred pond as well.

In another folklore, it is said that when people soaked the pond before going worship in the shrine, the water level does not fluctuate regardless of adult or child (it comes to the same level of height as the chest).

So, please feel the mysterious and sacred atmosphere by yourself.

The most mysterious and curious site in Kashima Shrine is Kanameishi.

The site is located at the back of the shrine near the Huge catfish monument and has Interesting background.

Referring to folklore in Kashima Shrine, it is said that the stone has held down the head of a big catfish because people believed that it causes an earthquake at that time.

During the Edo period, Tokugawa Mitsukuni tried to dig up the stone, but it can not be unearthed although the work was carried out for one week.

Also, it is said that when people try to dig up, many attendants were injured curiously, so the work was canceled finally.

Kashima Shrine is a vast site as I mentioned, but it just takes less than 2 hours to explore.

So, If you have the opportunity to visit Kashima Shrine, the attractive spots around there should be also checked.

For example, an Interesting spot around Kashima Shrine is below.

These spots are near Kashima Shrine, so please visit these sites as well.

The First Gate of the west

Around Kashima Shrine, there are toriis at the four points of the compass, and The First Gate of the West is one of them

The First Gate of the West is called Nishi-no-Ichi-no Torii in Japanese, and the feature of it is the below.

The scenery with torii and sunset is very impressive so that it steals your heart away.

Just so you know, it takes 2km and 30 minutes from Kashima Shrine to The First Gate of the west on foot, but there are few tourists compare to the shrine.

So, you will be relaxed in this quiet and magnificent place while feeling a distinctive atmosphere.

Kashima Shiroyama Park is situated in a place that takes around 10 minutes from Kashima Shrine.

Originally, the castle was standing in this spot, so the memorial monument is also there.

The park is unexpectedly wide, but the most surprising point is the magnificent scenery.

You can see the western part of the Kashima area including a Japanese residence, see, a railway, and mountains.

If you want to see the great scenery like here, Kashima Shiroyama Park suits your travel.

Assuming that you travel by train from Tokyo, the best way to access Kashima Shrine is below (you need to change the line three times).

Caution: the train is about once an hour at Katori Station (number 4).

Kashima Shrine has a deep history, mysterious places, and magnificent spots around the shrine as I described.

So, please visit and find those attractive sites by yourself because it makes you impressed and gives a deep understanding of the Japanese traditional site.